The Real Philadelphia published by the Philadelphia Business Progress Association in 1930. The amazing cover was designed by Jules F. Doriot and the photographs were taken by William M. Rittase. In my opinion, Real Philadelphia is the most interesting Philadelphia book from a design perspective. Click on the image to access the book. 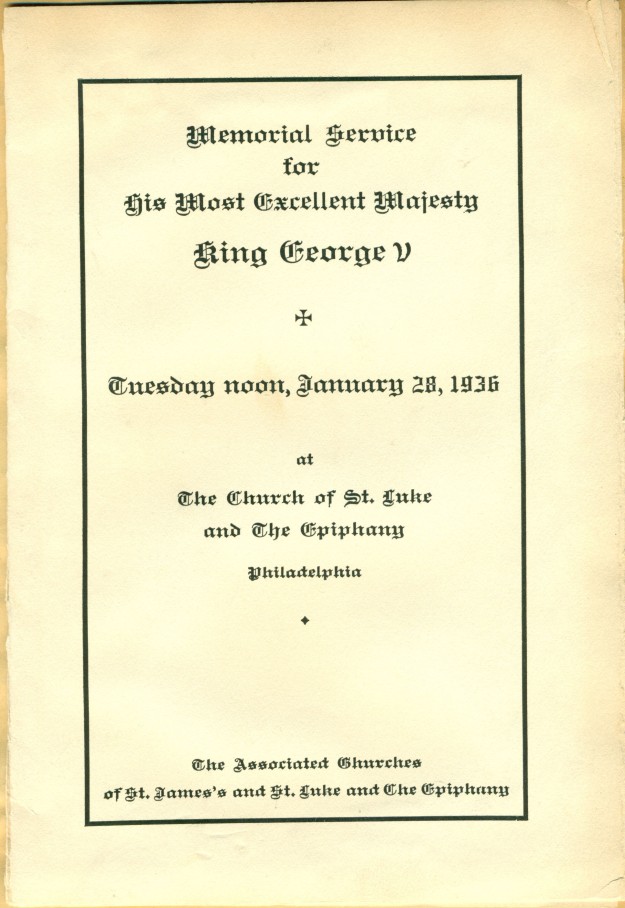 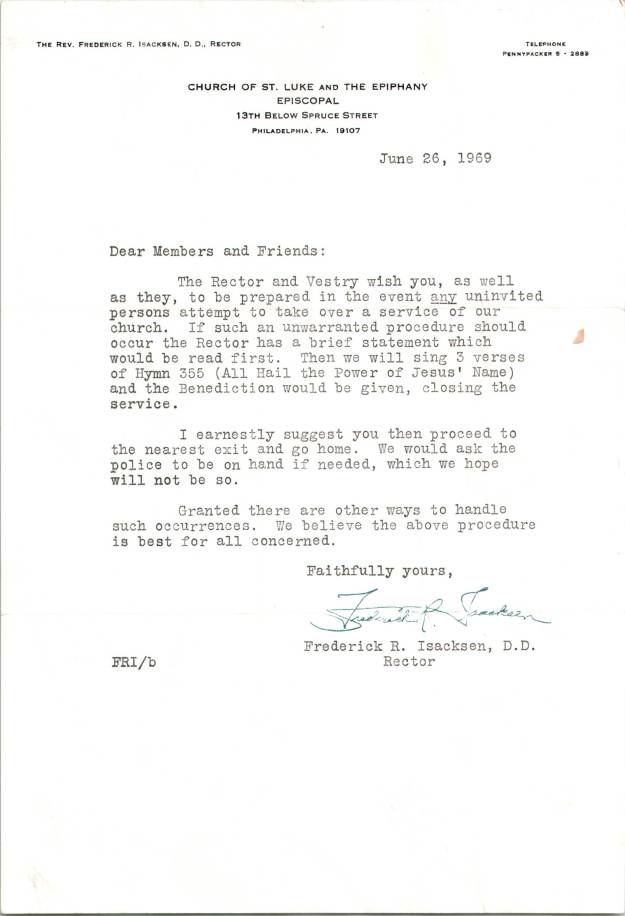 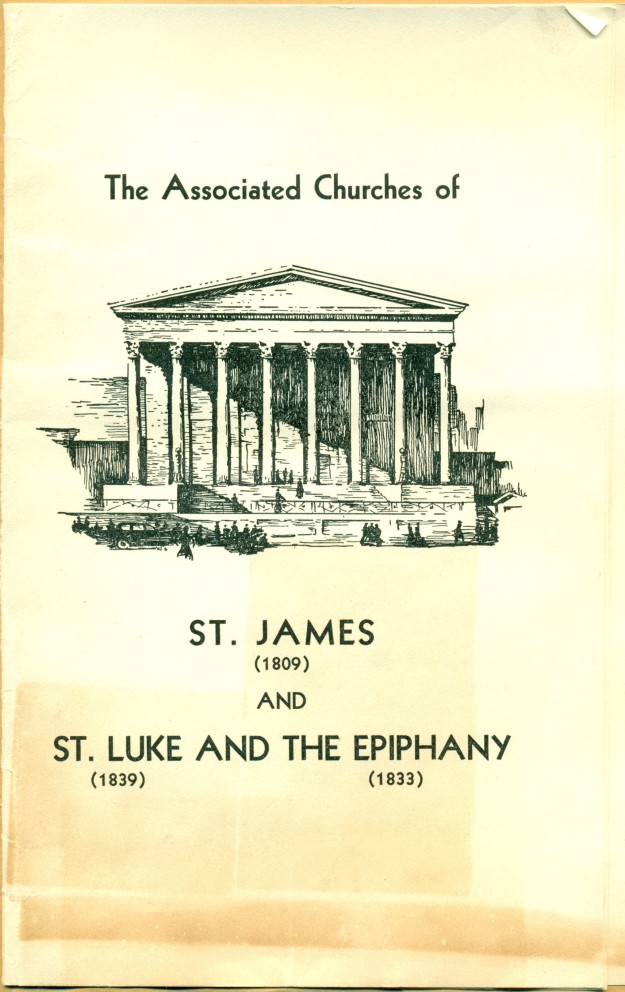 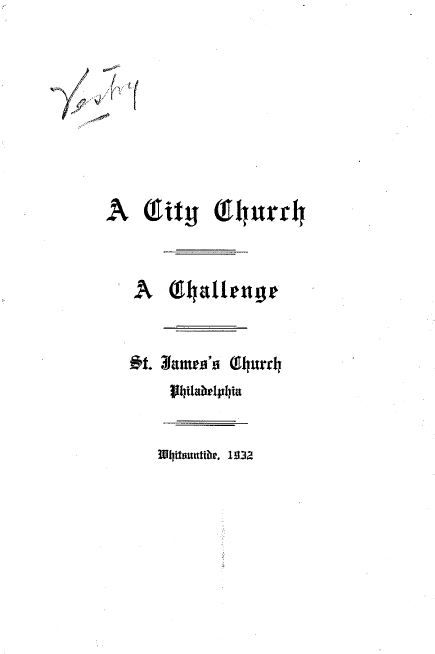 New York has Brooks Brothers, New Haven has J. Press, and Philadelphia had Jacob Reed’s Sons. Closed since 1983, Jacob Reed’s Sons is long gone but far from forgotten [for example – here, here, and here]. I have heard many stories of this venerable institution over the years (to bad I did not write any of these stories down).

The firm published a small (40 page) pamphlet to commemorate their 100th anniversary in 1924. I was lucky enough to purchase this pamphlet about two years ago. I know I purchased it on eBay, but I don’t remember how much I paid. Now if I could only find a history of Miller/White! 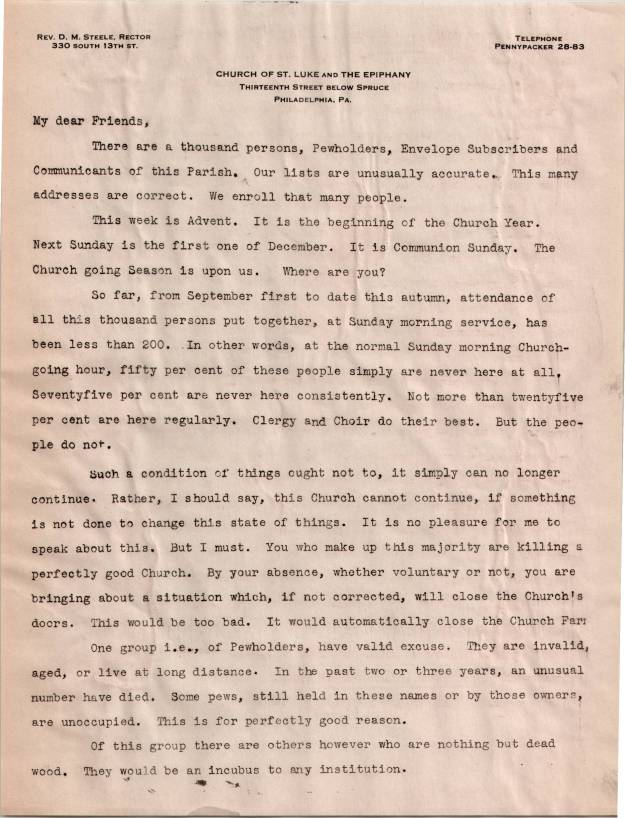 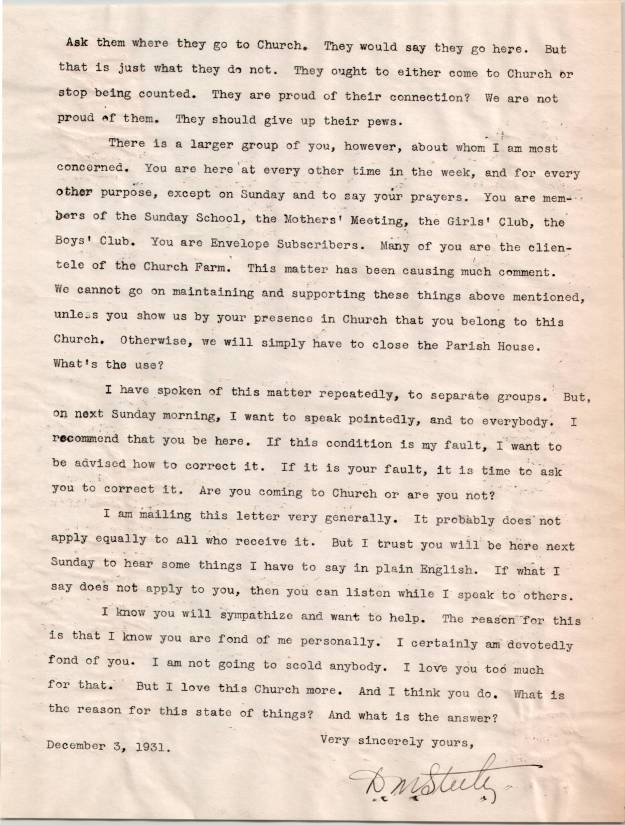 From the March 1933 Church News 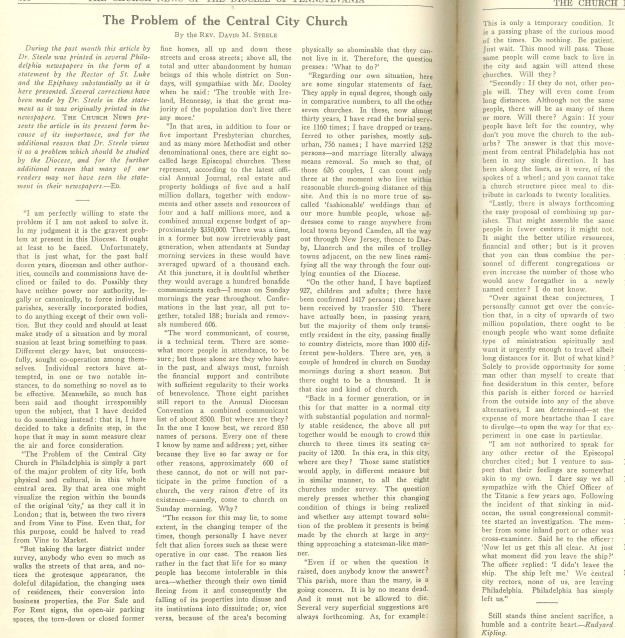 Our First Hundred Years: The Story of America’s Oldest Theatrical Costume Firm 1852-1952. Privately printed in Philadelphia in 1952. 24 pages. The only libraries in Worldcat with this item are University of Washington and University of North Carolina – Chapel Hill. I found this item on eBay for $9.99 and free shipping.

Look closely at the Sunoco station on the northwest corner of 22nd and Walnut Streets, and one can envision a Philadelphia that once was. Michael Webb’s 1995 mural of St. James’s Church (Episcopal) gives the viewer a chance to imagine the high Victorian Gothic structure that stood here from 1870 to 1945. St. James’s was once the spiritual home to many of Philadelphia’s leading families of the late 19th century – a time when Philadelphia’s upper class centered around and near Rittenhouse Square. Although St. James’s was just one of 11 Center City Episcopalian congregations that closed, merged, or moved since the Civil War, St. James’s, seemingly, abrupt demise and demolition gave many Episcopalians pause. Many wondered if Episcopalian congregations still had a place in an increasingly mobile and secularized city. St. James’ leadership were among the first to realize that significant action was needed since, even for this high church parish, the old ways were just not working anymore.

E. Digby Baltzell, writing in the Philadelphia Gentleman (1958), had this to say about St. James:

“Although St. Mark’s and [Church of the] Holy Trinity survived the suburban exodus, St. James’ eventually became a casualty when it was sold to the Atlantic Refining Company (a convenient spot to refuel before taking the Parkway to the suburbs) during World War II. St. James’ struggle for survival in its last years provides an interesting case history of the atomization of urban life in the twentieth century. The exodus of the old families to the suburbs accelerated in the [nineteen] twenties. Finally, in 1925, it was decided to do away with the ‘family pew’ at St. James’. At the time, the Philadelphia Evening Bulletin reported the decision as follows: ‘St. James’ is finally open to the masses. Pew rents have finally been dropped. It is reported that some of the pews here rent for as high as $2,000 a year. Often the same family rents the same pew for several generations.’

“The final step in attempting to reach the urban masses at St. James’ was taken when the vestry called the Rev. Joseph Fort Newton to be co-rector along with Dr. John C. H. Mockridge, rector of the parish since 1915. John C. H. Mockridge had been one of the most respected high churchmen in the city for many years. He was a strict Anglo-Catholic, born in Canada, and educated at Trinity College, Toronto. He was often mentioned as the High Church candidate for the Bishop of the Diocese of Pennsylvania … For the sake of his beloved St. James’, he finally consented to the appointment of Dr. Newton in 1930.”

“During World War I, Joseph Fort Newton had gained a worldwide reputation as the rector of the City Temple, often referred to as ‘The Cathedral of Nonconformity,’ in the heart of London…Together with other plans for popularizing the work of St. James’ – concerns, recitals, lectures, and sermons – the appointment of a ‘man of vigorous and vital utterance, eloquent, and with a voice which charms’ should have revived the staid, old, first-family church.”

Baltzell’s representation of the demise of St. James Church is very incomplete. Soon after the Diocese of Pennsylvania decided to construct its new cathedral in Roxborough, instead of the Benjamin Franklin Parkway, Dr. Mockridge decided to turn St. James into a cathedral, of sorts, for Center City. Although he was an Anglo-Catholic, Dr. Mockridge wanted to offer various liturgies to appeal to the various levels of churchmanship.  In order to make the parish open to all, the tradition of pew ownership would need to be abolished. As stated earlier, Dr. Mockridge successfully convinced the vestry to move into this direction in 1925. Although initially, the move hurt the parish’s finances. Yes within a year attendance started to increase for the first time since 1915.

As  Baltzell notes, Dr. Mockridge hired Rev. Dr. Joseph Fort Newton as, the non-canonical, co-rector in 1930. Largely forgotten now, Dr. Newton was a celebrity preacher and noted religious writer. His presence adds fame and notoriety to Dr. Mockridge’s project. The worsening economic conditions dampened their efforts. As Dr. Newton remarked in his autobiography “in these despites, our project got off to a good start, at full speed, just as the Great Depression descended upon us, ‘like a thousand of brick,’ as they say down South…Indeed, it well-nigh flattened us out. Spiritually our work was a triumph; financially it was precarious, if not impossible – to the great delight of a lot of people – static stick-in-the-muds – who thought that because a thing had never been done, it ought never to be tried (p. 257).”

Soon after negotiations broke off, Dr. Mockridge authored a pamphlet titled “A City Church: A Challenge.” He argued that “a different sort of growth is now evidence. There is arising in central Philadelphia a vast and magnificent cultural, commercial, and charitable center wherein hospitals, museums, colleges, banks, railroads, shops are all working out great plans of expansion to meet the needs of that new fascinating thing in human social life – the American metropolis. It is only the churches that seem to be totally unaware of the gigantic process going on: and, unless they wake up, the “City of Churches” will soon be a city without churches – for the central churches of Philadelphia are dying (p. 4).” He challenged his congregation to raise the funds themselves to continue that the successful changes already put in place. He remained the congregation that “we are not trying to ‘save St. James’s,’ that would be but a poor business. We believe that we are in the midst of what is in fact and in truth a genuine missionary enterprise. If the Church is to success in great cities her people must do large, bold things: and if the Church fails in the cities she ceases to be one of the things that matter (p. 15).”

St. James’s congregants answered Dr. Mockridge’s plea with additional, though modest, funding. He then began the quest to find another merger partner, and he found a kindred spirit with Rev. Thomas Leonard Harris, the young rector of St. Luke and The Epiphany. The British-born Harris came to Philadelphia in 1933 as a supply priest to fill the pulpit left vacant after he abrupt resignation of Rev. Dr. David McConnell Steele. Steele had been in the pulpit of St. Luke and The Epiphany for almost 30 years.

The union was not without potential conflict, the most important being liturgical. St. James’s was firmly High while St. Luke’s was more  Broad to Low. From St. James’s perspective, this would not be an issue since various liturgical styles were already being used. While for some at St. Luke’s any deviation from Dr. Steele’s liturgical practices was seen as Anglo-Catholic encroachment.

Rev. Harris likely may have sold the project to St. Luke’s vestry as a cost-savings measure, however he and Dr. Mockridge had other plans. They saw the union as a vehicle to remake the church for the urban condition such as it was in the 1930s. If the merger was completed, the combined resources would fund a social services center with a large staff of outstanding preachers, administrators, psychologists, and social workers to provide a new type of Christian outreach – one where liberal Christian values would be combined with Roosevelt/New Deal social justice. The intended beneficiaries were those huddled into one-room apartments, without modern conveniences of electricity or plumbing, throughout the St. Luke’s neighborhood – especially along Camac, Quince, and Juniper Streets.

At the end of the two years, St. Luke’s vestry concluded the union was a failure and it ended on January 1, 1937. The trial union failed to increase church attendance, and in fact attendance continued to decline. Further, Dr. Steele, the former rector, bitterly opposed the merger and used the Philadelphia press to argue his case. He still held considerable influence within the congregation and perhaps that it was his influence that doomed the merger. The most likely reason for failure was that by 1937 St. Luke’s endowment had stabilized to 1933 levels and the church could afford to go in it alone, at least temporarily. The end of the Associated Churches marked the end of Rev. Harris’ rectorship at St. Luke’s. Rev. Dr. Joseph Fort Newton would assume the Church of St. Luke and The Epiphany pulpit in mid-1938.

Mockridge retired in 1940. Ultimately, the Depression failed merger attempts, and World War II was just too much for St. James’s. By 1945, the parish just gave up. As J. Wesley Twelves wrote about he final days of St. James, ” Although there was an endowment of over $100,00, [the parish] felt that the lack of a more substantial income made it impossible to continue (p. 127).” However, the concepts advocated by St. James’s leadership would be those ideas that would prove to be among the necessary ingredients to a successful Center City congregation.

Genealogia pescopaganesa: Documenting life in the Mezzogiorno through one town's vital records

From minuet to hip-hop, from colonial assemblies to flash mobs; it’s all here.

Your guide to food and fun in South Philadelphia's Italian Market

Ron Emrich – beliefs about the future

The place for news of Philadelphia's urban transformation and more by Marley Bice, AICP

Stories of how Philadelphia's Gayborhood came to be, featuring photos, artifacts and documents from the John J. Wilcox Jr. LGBT Archives.